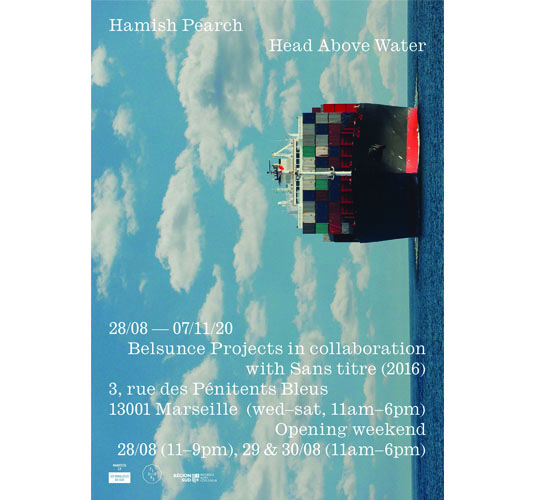 They sit huddled by the water’s edge, a subdued gathering of orange, green, magenta, blue. As the rising light glances over their reinforced steel shells, stray shadows catch at the corrugated sides, fooled by the illusion of depth. Nothing penetrates. From the sky, they are military decorations stitched across a broad grey chest.

They are being held in a marginal place, awaiting allocation. This place has a different geometry to the rest of the coast. It is functional and deliberate, comprised of careful incisions cut into the land like the inner workings of a complex lock, and a thin jetty which runs alongside, rationalising the jagged coast into a single hinged line.

Marseille’s Fos Port is a circuit board, alive with discreet intention. By day, the arriving boats jostle like eager suitors as a line of sentinel cranes pivot and bow over the concrete, shuffling units like tarot cards. The air is filled with industrial noises and the smell of petrol and salt. Every movement is dictated from a distance.

By night, the mechanical dance continues. Sunshine is replaced by harsh fluorescence and torchlight. Security cameras twitch at fleeting movements as guards patrol the perimeter. Under the toxic buzz of tungsten lamps, goods are unloaded from lorries, held in stasis, then placed on a carousel and passed on to the waiting boats.

This place possesses a unique psychic energy. As a site of storage and transmission, every passing object, idea and face leaves an impression. They pool in the gutters and bloom out of the concrete, merging with the industrial landscape to form compound identities, so that the place itself, filled with so much fluctuating and fragmented matter, constitutes an altered state.

Despite the implied impregnability of steel and concrete, the site is revealed to be mostly water and therefore mutable. As a result, these impressions have a subjective quality to them. Vague images swim into focus: averted eyes, a cluster of cells, a forming wave. Ideas of what could be true, or might have been intended. Content, provenance and destination remain obscure.
Even the units themselves, each as defined and opaque as the back of a head, melt into a single, convergent mass as they are held together in this nowhere place. Their colourful stacks stretch into long, orgiastic ribbons of possible identity, pollinated by the atmosphere. Their resolute sides morph into fertile sites for projection and extrapolation as the irrepressible ocean swells beneath.

Selected by Maniesta 13 to be part of the “Parallèles du Sud” program, Belsunce Projects presents Head Above Water, a solo show by British artist Hamish Pearch. The works will be produced specifically for the show with the help of Sans titre (2016), responding to the context of the city of Marseille and of Manifesta.
The exhibition is conceived as an evolutive environment. Throughout its duration it will host performances, talks and activations, including a sound piece in collaboration with Will Rees, and a screening of ‘We Are Opposite like That’ by Himali Singh Soin.

Head Above Water – Solo show Hamish Pearch is supported by Manifesta 13 Marseille, Fluxus Art Projects and Région Sud. This exhibition is also part of PAC OFF 2020.

Belsunce Projects
Belsunce Projects is an exhibition space based in Marseille, founded by Won Jin Choi and Basile Ghosn in 2018. Exhibition Head Above Water is co-organized by gallery Sans titre (2016), based in Paris.
Site web
Faceboo
More info