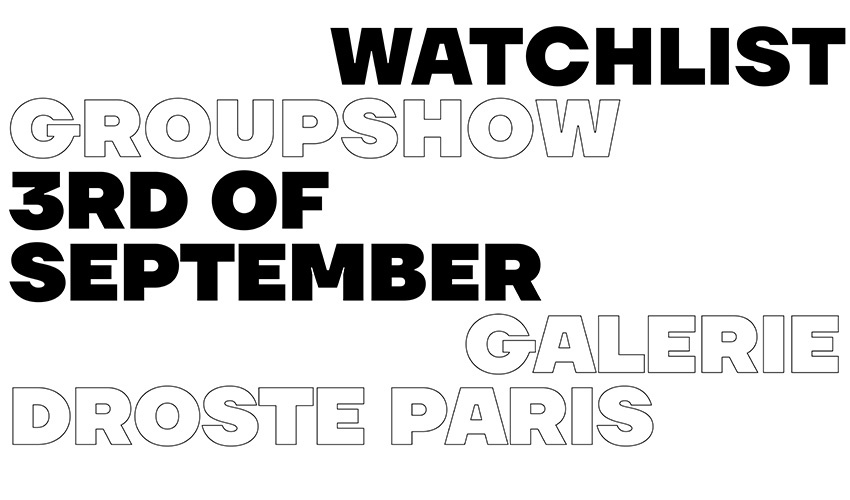 « A, it doesn’t happen, and B, it doesn’t happen as you think. »
The Joking German Commentary describes an event that happens differently than planned.
You could also say that life is full of surprises. Or in this case the year 2020, which I think surprised us all and threw all our plans overboard.

Normally our program is set one year in advance, but due to the pandemic, our plans have changed and we have changed our schedule.

With the exhibition WATCHLIST we would like to introduce you to artists who have caught our attention. So to speak our very personal MUST-SEEs. The exhibition takes place in our new Parisian premises and includes works by 6 up-and-coming international artists in the fields of sculpture and painting. Represented are Lydia Maria Pfeffer, Mark Posey, Tim Sandow, Ralf Kokke, Oh de Laval and Jc Earl.

The opening of the exhibition WATCHLIST will take place on Thursday, September 3rd from 3 – 9 pm in the Galerie Droste, 18 rue Dussoubs, 75002 Paris. Please note that you must wear a protective mask, keep a distance of 1.5 meters and that no more than 2 persons are allowed in the gallery premises at the same time.

The PDF catalogue of the exhibition can be found on our website and by e-mail at info@galeriedroste.de.

Lydia Maria Pfeffers work focuses on the psychological interpretations of cultural symbolism, rites, rituals and escapism as revelation. Her attraction for anthropomorphism, symbolism and personification can be traced back to early childhood, when she fell in love with fables, fairy tales and mythology. One of Pepper’s strongest influences is Jung’s idea of the « collective unconscious.
With strong female protagonists, Pfeffer reinvents existing stories from history and literature, reshapes them and weaves them into her own contemporary narratives.
Lydia Maria Pfeffer, born 1976 in Austria, lives and works in Los Angeles, USA. She received her BFA from the Fashion Institute of Technology in New York in 2013 and her MFA from the School of the Art Institute of Chicago in 2016.

A discrepancy between content and form. Oh de Laval’s figurative compositions show us a childlike world in delicate colours full of violence, sex and love.
The relentlessly depicted stories of human « naughtiness » contradict the delicate and lovely colours of naive painting, but are thereby emphasised once again and intensified in their brutality. It is almost as if her protagonists were able to act freely in a doll’s house that has been made into a doll’s house and to follow her natural urge. The viewer finds himself in an unexpected voyeuristic position that leaves ambivalent emotions behind.
Oh de Laval currently lives and works in London, UK.

It is above all the playful approach to the genre of the still life that marks Mark Posey’s work. However, the almost comic-like painting style and the changes of perspective break with the conventions of old-masterly painting. New painting techniques can be seen in many of his works, which allow Poseys joy in his work to permeate. This is also true of his current cycle of paintings, in which old-fashioned church or ordinary living room window frames allow a blurred view of the outside world. As if covered with condensation water, the panes were used by an imaginary person as a painting background, representing childlike writings or scribbles. Colourful neon signs or transfigured landscapes appear behind them, leaving the viewer with only a hint of what is probably behind this window. It is an almost nostalgic view into a small section outside of the own spatial world.
Mark Posey received his BA from UC Berkeley in 2010 and his MFA from AAU San Francisco in 2012. He currently lives and works in Los Angeles.

Born into the dockworkers’ class of Rotterdam, the works of Ralf Kokke represent the life that shaped his childhood and youth. At home in figurative painting, people are the central theme of his oeuvre. His figures take up any space within the picture carrier, as if they were literally locked up in the frame. In their technique, the canvas works are reminiscent of New Objectivity painting or even Flemish Expressionism, whose attention was also focused on the sober themes of the working life of industrialization and its limitations. Nevertheless, the humorous banalities of everyday life do not remain hidden from the eye of Ralf Kokke, and so the artist always leaves the door to the lightness of being a little bit open.
Ralf Kokke received his BA from Royal Academy of Fine Art Antwerp in 2014. He currently lives and works in Dordrecht, The Netherlands.

Tim Sandow’s content-related imagery is fed by the tragedy of the everyday, which can only be captured through the sensitive observation of human gestures and situations. The artist from Wuppertal develops a distanced, yet not self-exclusive position for himself as a viewer by means of disconcerting depictions of the persons depicted. This allows him to act without any classification. His picturesquely created intermediate worlds thus create a gentle and accessible view of socially determined clichés. Sandow’s works refer to the quiet nuances of everyday interaction that are so often the source of very personal anecdotes. « For some, perhaps like a politically incorrect regulars’ table joke, for others perhaps like a filmic memory. That’s why the attributions of meanings go in completely different directions, which I can neither pretend nor want, » says the artist.
Tim Sandow graduated from the Kunstakademie Düsseldorf and Akademie der bildenden Künste Wien, 2019. He currently lives and works in Wuppertal, Germany.

JC Earl, also known as Julien Cadou, is a French multidisciplinary artist, working as graphic artist, sculptor, illustrator and painter. After more than 30 years of experience within the art scene Cadou set focus on ceramic sculptures, which are marked by comic inspired characters. The small ceramic pieces seem to develop straight out of our urban surroundings, imitating the pop cultural interests of our time, but also the physical expressions of the youth. With humor and a sensitivity for human behavior and thinking, Cadou produces life-like imitations of the young society nowadays.
JC Earl currently lives and works in Paris, France.